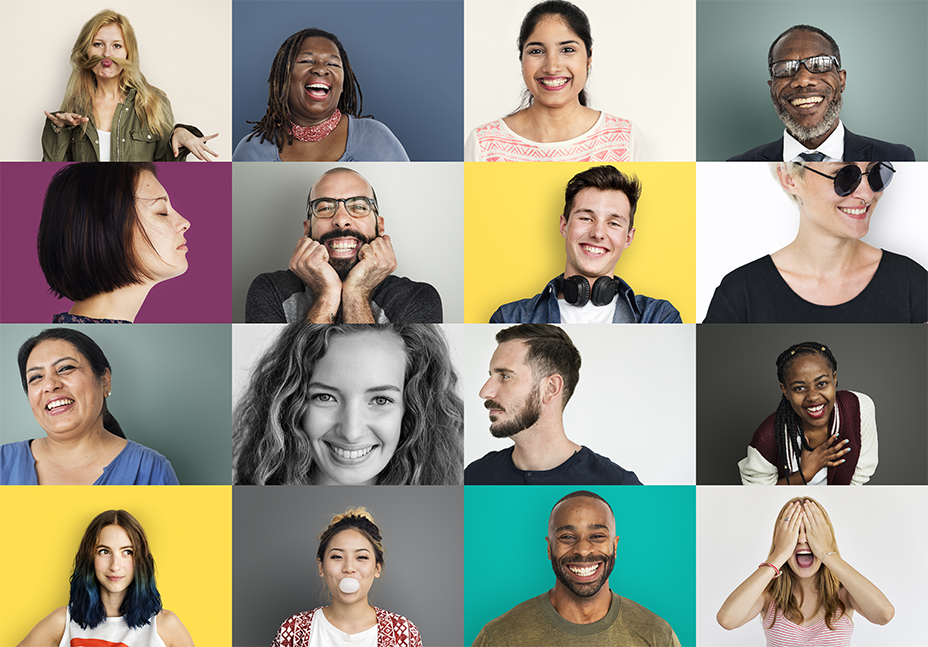 Recent events involving police brutality and systemic racism continue to ignite the world as we’ve seen impassioned protest in support of racial justice unfold globally. To meet society where it is in this moment, companies are shifting gears and awakening to the dire need for big brands to support the Black Lives Matter movement and dismantle the structures that have long oppressed people of color.

As the conversation grew, so did its focus — covering not just police brutality, but all forms of systemic racism. For many companies, this brought new urgency — and attention — to the ways they promote diversity, equity, inclusion, and belonging.

But will this mark a real movement in corporate diversity, rather than a moment? New LinkedIn data shows that companies talked far more about diversity in June 2020, but that discussion began to decline as early as July.

Despite that drop, there’s reason for optimism: employees and candidates remain highly engaged in the conversation, and may be more likely to apply to companies that are outspoken about diversity.

Read on to see how the diversity conversation is growing, whether it’s resonating with candidates, and why there’s hope that these discussions can translate into change.

Diversity discussions spiked in June, but show signs of waning
In June 2020, employers on LinkedIn spoke about diversity more than any other time in recent memory. As a share of all company posts, coverage of diversity topics more than doubled (2.2x) year-over-year.

These messages resonated strongly with employees and candidates: posts about diversity got nearly twice (1.9x) as many engagements as the average company post. This was especially true in North America, where engagement rates on diversity topics were over 2.6x greater than average. 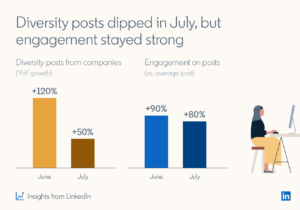 By July 2020, though, the diversity discussion had grown significantly quieter. Companies still spoke about these issues more than usual — but rather than doubling diversity content, posts were up just 1.5x compared to the previous year (+50% YoY).

That doesn’t mean employers became any less committed to improving diversity. While messaging can be done immediately, making structural changes to your workforce can take several months — and it can be especially challenging at a time when hiring has slowed down dramatically.

That suggests companies may have scaled back their diversity messaging prematurely: candidates and employees are still eager to hear their perspective on diversity — provided that all the talk is backed up with action.

Speaking up may make companies more attractive to candidates 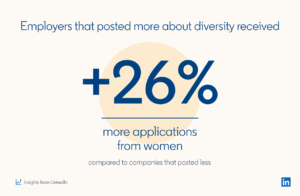 Ultimately, actions may speak louder than words: a full commitment to diversity will be seen in a company’s hiring practices, not just in their employer branding.

But for companies that struggle to attract candidates from diverse backgrounds in the first place, messaging could make a real difference: employers that posted more about diversity got 26% more applications from women, compared to companies that posted less.

That doesn’t mean posting about diversity will automatically attract a more diverse candidate pool — but it does suggest a connection. Applicants that see you taking an outspoken stand on diversity could gather that your company will offer a more inclusive workplace.

Final thoughts
After spiking in June, companies’ discussion of diversity has dipped — but members’ interest has stayed strong. Companies may want to keep the conversation going — so long as it’s not just talk. Championing diversity in your employer branding isn’t sufficient by itself, but it could be an important step that changes how candidates see your company. And that could make it easier to build a truly diverse workforce.

The workforce is changing and calls for greater diversity in …

The Advantages of Hiring Contract Workers

In an era of shared workspaces, freelancers, consulting, and working …

Resume Parsing: How to get your resume past the tech and into the hands of a recruiter

Beat the bots and get your resume in the hands …

There is no doubt the pandemic impacted the business world …

Taking a video interview can be a bit intimidating. Some …

Job Searching in 2021: Tips to Help You Adapt

It is probably safe to say that many of us …

Soft Skills That Will Matter Most in 2021

This year has put companies and individuals to the test. …

The Mission Case for Diversity and Inclusion

There is strong support for the conclusion that diversity in …

Because of the pandemic, companies not carrying out essential work …

Hit enter to search or ESC to close